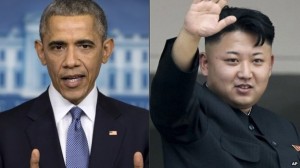 The United States has imposed new sanctions on North Korea in response to a cyber-attack against Sony Pictures Entertainment. US President, Barack Obama signed an executive order on Friday whichallows sanctions on three North Korean organisations and 10 individuals. BBC report:

The White House said the move was a response to North Korea’s “provocative, destabilising, and repressive actions”.

US sanctions are already in place over North Korea’s nuclear programme.

But Friday’s actions are believed to be the first time the US has moved to punish any country for cyber-attacks on a US company.

Among those named in the sanctions were: