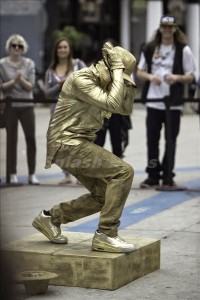 Superstar R&B singer, Usher shocked a lot of people as he showed off his dance moves on the streets of Venice, California.

Usher filmed a video alongside a contestant from season eight of The Voice.

Usher started off by putting on a mask so that people won’t recognize him, after showing off his skills, he pulled off his gold mask to reveal himself.

His fans were screaming on top of their voice.