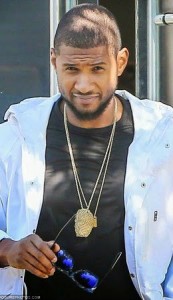 The ever young singer, Usher might still have his powerful singing voice but not his former physical strength.

The handsome talented singer got into a fight at a night club in Miami on New Year’s eve after a man reportedly disrespected his girlfriend.

Usher shared a photo of his red eye eye on his Instagram page the next day, saying the person he fought with got a worse deal.

Some days after the brawl, Usher is still sporting the red eye as he was seen shopping in Beverly Hills yesterday.