Was Davido Referring To Diamond Platinumz As A Bastard On Twitter?!? 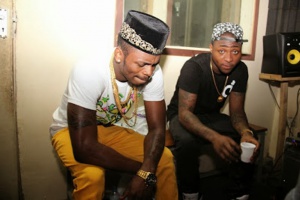 I thought this beef was dead and gone but it seems like it just started.

The year is still fresh but it has begun on an aggressive note for HKN act, Davido. The Omo Baba Olowo went on Twitter to lash out at someone that may have really pissed him off.

Not mentioning any names, Davido cursed the certain individual out, using words like “Bastard’’, ‘’Broke Fool’’ among many others.

“Ur downfall is coming u bastard ungrateful broke fool!!’’

He further went on to say; “Niggas forget who helped them ….. So quick …. God don bless me I do my thing dey go keep my name out ur mouth !! WHO U DON HELP IDIOT!”.

Ur downfall is coming u bastard ungrateful broke fool!!

This clearly shows that Davido isn’t considering dropping twitter brawl as part of his New Year resolutions as just in the first week of the New Year, he is on the rampage on social media yet again.

I bet you are all wondering who could he be lambasting? The speculations making waves has it that the BET 2014 Best African Act could be referring to Tanzanian music star Diamond Platnumz.

The beef started late last year when Davido had taken a shot at Channel O Music Awards and Big Brother Africa over what he perceived to be a bias against Nigeria in the award giving, and decided to say something about it.

In a slick way he just said “N they cheat again” when Idris from Tanzania was announced as the BBA winner over Tayo. Davido had also lost out on all 5 of his nominations at the Channel O Music Awards a few weeks ago.

Here is what Diamond Platnumz had this to say on twitter and Instagram weeks after Davido’s comment. Any way you look at it, it’s definitely a swipe at Davido.