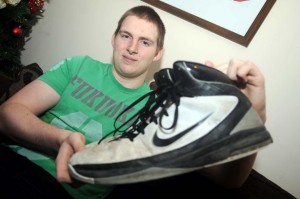 A rugby player with the biggest feet in the UK has been sidelined because he can’t find a new pair of his size 21 boots. 22-year-old Carl Griffiths is too big for his boots – and has worn out his last pair of boots playing for his village rugby team. Celeb News reports:

Carl has been playing in size 18 boots for the past three years – with his toes curled up in the ends – to turn out for his local club.

But after keeping them together with black sticky tape they have finally fallen apart.

He is now appealing for help to find a new pair of boots that fit.

Carl said: “At least when you have an injury, you know you just can’t play for a while.

“But when I’m out just because of not having shoes that fit, it’s just really frustrating.

“I just want to play rugby. I’ve had some boots in size 18 and I wore them with my toes curled right up, but I broke a toe when someone stepped on it.”

Carl, from Carmarthenshire, West Wales, has been forced to sit on the bench for local club Trimsaran RFC – who have been missing the 6ft 8in player in their line-outs.

Every sports firm Carl has contacted has said they simply do not make boots as big as size 21.