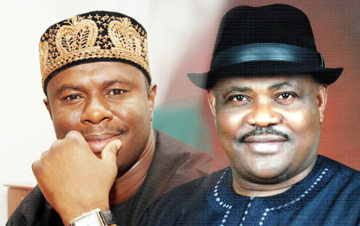 The governorship candidate of the All Progressives Congress in Rivers State, Dr. Dakuku Peterside, has accused his main rival, Chief Nyesom Wike of the Peoples Democratic Party, PDP, of cloning his blueprint for the development of the state.

Peterside, who threatened legal action against Wike and the PDP, insisted that the blueprint, unveiled by Wike on Monday, was lifted from his (Peterside) own original programme for the development of Rivers State.

The APC governorship candidate, who made this known on Monday in Port Harcourt while unfolding his agenda for the development of the state, claimed that Wike’s camp attempted to break into his website with the aim of cloning his blueprint.

He said, “We were informed some weeks ago that some persons from Barrister Nyesom Wike’s camp are scheming to break into our website for the singular aim of cloning our blueprint and plagiarising the concepts we have studiously and painstakingly done to chart a road map for the development of Rivers State”.

Peterside added that those behind the cloning did a poor job in breach of extant copyrights law.

He argued that the development was an indication that they had no original ideas to better the lives of people of the state.

Peterside said, “You can tell they have no constructive plans for the people of Rivers State. They just want to be seen to have taken over the reins of government.

“We discovered what they had done just this afternoon and we have briefed our team of lawyers to take a professional look at the cloned copy and the copyright laws and advise us on what legal step to take. You can be assured we will not allow our intellectual property right to be breached”.

Peterside reaffirmed that he was not desperate to govern Rivers State, maintaining that the opportunity to teach in the university was there for him since he held a PhD in Organisational Behaviour.