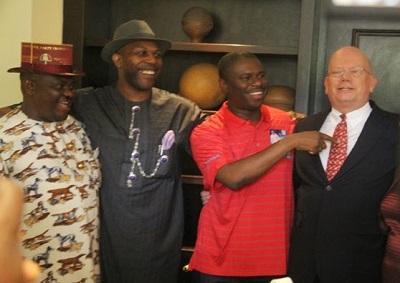 Ahead of the general elections in Rivers State, three leading governorship candidates in the state, on Thursday pledged to work towards ensuring a violent-free poll next month.

The governorship candidates are: Dr. Dakuku Peterside of the All Progressives Congress, Chief Nyesom Wike of the Peoples Democratic Party and Prince Tonye Princewill of the Labour Party.

The candidates signed the peace pact in Port Harcourt, the state capital on Thursday, during a roundtable organized by the United States Embassy in Nigeria in partnership with a group known as Dawn in the Creeks Board of Advisors.

Wike, Peterside and Princewill agreed that they and their supporters promised to promote peaceful participation in the forthcoming general elections and accept the outcome of the exercise.

They also assured that they would only seek redress for any perceived injustice through legitimate channels.

“I (name), do hereby pledge on behalf of myself and my supporters, to promote peaceful participation in the 2015 elections and beyond. I further pledge to accept the outcomes of the elections, whatever they may be and to seek redress for any perceived injustice through legal and legitimate channels”, the three candidates recited in unison at the occasion.

The PDP governorship flag bearer specifically stated that he and his party were committed to a peaceful poll that would be void of violence, maintaining that peace was necessary for the growth of the state.

Similarly, Peterside, who took his turn to speak, said apart from election periods, peace was also crucial to the unity of the state.

In his remark, Princewill described the peace agreement as apt and essential, even as he noted that any election conducted in an atmosphere of violence always had its negative impact on the state or the country.

Princewill reiterated his party’s commitment to a peaceful, free and fair elections next month, stressing that a violent-free poll will foster the development of the state.

However, the United States ambassador to Nigeria, Mr. James Entwistle, who spoke earlier, explained that peace accord became necessary as a result of his country’s interest in violent-free elections.

Entwistle, therefore, called on stakeholders in the state to show sincerity in their declaration for peace before, during and after the elections.

Apart from politicians, among signatories to the peace pact were clerics from the Christian and Islamic faiths and non-governmental organisations.