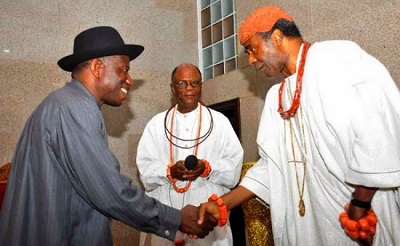 An Itsekiri Youth group under the aegis of Warri Study Group yesterday insisted that unless President Goodluck Jonathan performs the ground breaking ceremony of the $16 billion Export Processing Zone, EPZ, Ogidigben, before next month’s presidential election, the Niger Delta ethnic nations would not vote for him.

The group also described his surprise visit to Olu of Warri, Ogiame, Atuwatse II on Friday, as an effort in futility.

“Our position is that he should do the groundbreaking before the February 14 presidential elections, otherwise, he will lose not just Itsekiri votes, but the votes of other ethnic nationalities in the region, which are angry with his style of doing things”.

According to Ekpoko, the EPZ project would create thousands of jobs for unwaged Niger-Deltans and Nigerians, and wondered why a president, who claimed he was concerned about the unemployment problem in the country, would hesitate in performing the groundbreaking of such a job-spinning project because his Ijaw kinsmen at Gbaramatu kingdom were opposed to it.

Ekpoko, who lamented that the groundbreaking had suffered three postponements allegedly in pursuit of “unstainable Ijaw objections/agenda”, chided the president for inexplicably ignoring the benefits of the projects to other Nigerians.

His words, “The project will be of immense benefits to thousands of youths from Ijaw, Itsekiri, Urhobo, Ibo, Isoko and indeed, other Nigerians facing severe employment and Jonathan should not tie it to his election on February 14”.