One of Nigeria’s most remembered leaders, 37-year-old Murtala Muhammed, was killed on February 13, 39 years ago, in an abortive coup attempt led by Lt. Col Buka Suka Dimka.

Many years have passed, but the nation still remembers its great leader.

President Goodluck Jonathan via his Facebook page spoke about Murtala:

“Today marks the 39th anniversary of the death of that great Nigerian hero, Murtala Mohammed, who gave his life for this great nation. In his lifetime he espoused the belief that Nigeria had come of age and is ready to play her rightful role as the leader of the Black Race and a hub for progressive government on the African continent. Thankfully, Nigeria has immortalized Murtala’s legacy in books and monuments and will continue to do so such that our youth can learn from his life of purpose and commitment to higher ideals. May his soul continue to rest in peace and may God continue to comfort his family as a grateful nation remembers his sacrifice.”

For many Nigerians, getting to know Murtala Mohammed was from the green, crispy N20 naira note, which had its face inscribed on it, and really clear-headed stories told by parents. We gathered for some must-know facts you need to know about hero of Nigeria’s nation. 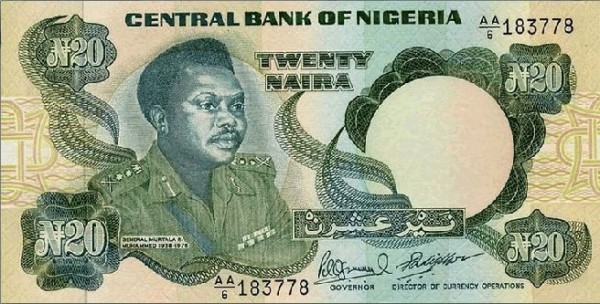 1. Born on a Tuesday, the 8th of November, 1938, in the Kurawa Quarters of Kano State to Risqua Muhammed and Uwani Ramatu, he had 7 siblings (one girl and seven boys) and he was the second child.

2. On the 26th January, 1952, he was admitted as student number 941 as the school itself was founded in 1909. He was one of the ten students from Kano and finished in 1957. One of his classmates was the late General Mohammed Shuwa shot dead at his home by gunmen in Maiduguri in November 2012. Shuwa was one of the prominent figures during the Nigerian Civil War and later a leading figure in Murtala’s government. Gowon also attended the same college.

4. Murtala might be a strong-headed soldier but he was an amazing family man. In 2006, his Yoruba wife (with partly Fulani roots), Mrs. Hafsat Ajoke Muhammed recollects the fond memories: “At home and at work, my husband was one and the same person. His behaviour at work and home were the same. He was a firm person, upright and had a great sense of humour.”

5. He was introduced to his wife by his cousin. They fell in love, hit it off, and when they met in Kaduna later, he proposed to her and they got married in Kaduna in 1963 after her studies, the same year he became a Captain. Their marriage was a blissful and peaceful one. In 1965, the marriage was blessed with a cheeky baby girl who later attended the Queen’s College, Yaba, Lagos.

6. At the time when Murtala was killed, his daughter, Zalihatu was just two years old, and Jumai was just a baby.

7. When Murtala was killed and the news was relayed to his wife, she broke down and wept for her dear husband.

8. Today, Mrs. Ajoke Muhammed is ageing gracefully, is widely respected for her charitable activities and calm demeanor. Even as a First Lady, she was not unnecessarily flamboyant. Her marriage was blessed with six children: Aishat, Fatimah, Zakari, Risqua Abba, Zalihatu, Jumai (she was just a baby, less than a year old when her father was killed). The daughters are now married.

10. The Nigerian Civil War (1967-1970) lasted for thirty blood-soaked months and one of the principal actors of that sad phase of Nigerian history was Murtala.

11. On the evening of the 30th of July 1975, Murtala made his maiden speech to the nation as the Head of State and Commander-in-Chief of the Armed Forces

12. He set up a panel headed by Justice Ayo Irikefe on the creation of seven more states (Niger, Bauchi, Gongola, Benue, Ogun, Imo and Bendel) to the 12 existing ones on 22nd December, 1975. The panel came up with a report which was utilized in the formation of new states in 1976.

13. Murtala was a blunt, outspoken and consummate risk taker. A soldier who ironically had no regard for the chain of command, he was in a class of his own when it came to dangerous exploits. A no-nonsense person, Murtala was known for his legendary outbursts of terrifying anger.