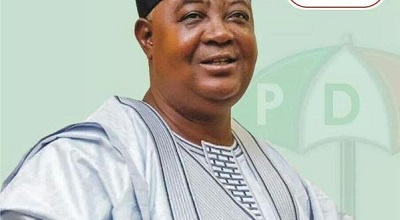 The students group, which made this position known while addressing newsmen on Sunday in Ilorin, said they took the decision to disown the PDP governorship candidate because he has not affected their lives in any way as students or youths.

They also accused Ajibola, who is currently the Senator representing Kwara South at the National Assembly, of not sponsoring a bill in his 12 years at the red chamber.

Speaking on behalf of the two groups at the press conference, Adeniyi Daramola said the serving senator has never attracted any meaningful project to the district but rather patronizes MDAs for contracts.

They said the little projects the senator credited to himself were all poorly executed and were carried out by his private company, which also served as project consultant.

“We hereby disown Sen. Simeon Sule Ajibola for denigrating the good people of Ekiti LGA for mis-representation and going against the collective wish of our people.

“Infact, to show the disdain he has for our people, the wedding ceremony of his son held in Lagos and Ilorin instead of his hometown. It would have been an opportunity for his friends to know how unpopular he is at home

“In as much as we are a non-partisan, non-political organisation, we however, owe it a duty to posterity as the conglomeration of Ekiti Local Govt Student Union and youth groups, to set the records straight on his stewardship as our representative at the Senate for the past 12years.

“It is expedient we came out to set the records straight as we have been inundated with series of enquiries by well-meaning Kwarans on the achievement of Sen. Ajibola vis-a-vis his achievements been circulated in the media. We took it as a responsibility to investigate all the alleged achievements.

“His constituency projects, contributions to the various communities in Kwara South senatorial district. After a month of painstaking investigations, we have come out with the true situation of Sen. Ajibola’s stewardship.

“It is on record that the people of Isapa, his hometown, rejected Sen. Ajibola since 2011 when he was seeking to return for the third term of uneventful sojourn at the red chamber.

“It took the plea of then governor – Bukola Saraki – for the people of Isapa to attend his campaign rally in Isapa that day, after extracting a promise from Ajibola that he will turn a new leaf. Sadly, he continued his ways of been a benchwarmer at the Senate”, Daramola said.

The group, however, thanked the State Governor and governorship candidate of the All Progressives Congress, APC, Alhaji Abdulfatah Ahmed, for upholding and representing the good and articulate people of Kwara South well with his landmark achievements adorning all sectors of the economy, from road constructions even to Isapa; tackling unemployment through QuickWin and KWABES; prompt payment of workers salary even with the dwindling federal allocation among other achievements of the state government.

They also expressed sadness at Sen. Ajibola’s antics of trying to whip up religious sentiments when he noticed the tide was turning against him as the good people of Ekiti LGA are not known for religious bias and segregation.