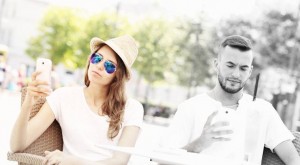 Is it just me, or does it seem like no one wants to date anymore? Invogue

Flirtationships have replaced relationships. People are hanging out instead of going out, texting instead of calling and meeting up instead of courting. The definition of dating has definitely shifted and I’m on a mission to figure out why so I can help you enjoy the dating process again.

It’s hard to get him to put a ring on it if no one wants to put a label on it first!

There are three big reasons why I believe our society just doesn’t date anymore.

First, there doesn’t seem to be a modern day definition of dating that everyone can agree on.

There are no real rites of passage for courtship and no one saying when it should begin, what the stages look like and what the end game is.

For example, when I listen to the love stories of my parents who have been married for 37 years and my in-laws who just celebrated 44 years of marriage, I notice a HUGE difference between how couples met, how relationships began and how they progressed into marriage back then and how we go about it now.

Now you have men wanting to get exclusive by date three and therefore no longer feel the need to impress a woman, or even take her out of the house.

Or, you’ll have a couple who is hanging out for three months, and when the topic of commitment comes up, the man says, “Oh, I like you but I’m not looking for a relationship.”

I’ve also heard from both men and women who were unsure about their purpose for dating. Some women recently told me they don’t want to EVER get married for fear of losing their independence. They just want a man who will hold them at night and keep them company during the day.

While the first problem is about how we define dating, the second problem has to do with how we meet and connect.

Online dating has made us more connected than ever! Millions of singles turn to the internet to find love. However, just because there are a lot of folks online, doesn’t mean there’s a lot of dating going on.

We’re revealing more about our private lives to perfect strangers on the internet, but we also distrust people too! Many of my clients don’t want to go on blind dates anymore. They’d rather Google a person first. I can’t say I blame them, though. People lie on their profiles, send offensive emails and make snap judgments about each other based on a picture! Where’s the romance in that?!

We’ve lost touch with how to communicate in authentic ways that create attraction, build trust and foster respect.

No wonder people are giving up on love! Men and women both tell me they’d rather stay alone instead of wasting time and energy on the games people play. It’s just too much work, they say. Dating is outdated.

But there’s a greater problem that really scares me. By opting out of dating, you’ve given up your hope and your faith in love!

Call me old-fashioned, but I believe in walks in the park, ice cream dates, romantic dinners, giving gifts, writing poems and singing songs. I believe in going out of your way to get dressed up, make a connection and explore the possibilities of the future together. I believe in love.

After all, how can you build strong relationships and enduring marriages if you can’t even figure out how to get it started?