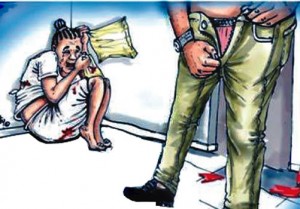 He was said to have been arrested by the vigilante in the area and later handed over to the police for investigations.

The state Police Public Relations Officer (PPRO), the Deputy Superintendent of Police (DSP), Ugochukwu Theodore, confirmed this, while parading the suspect alongside 16 others at the SCID, saying that the suspect would be charged to court after the investigations.

He explained that five of the suspects were arrested on three different occasions for cases of armed robbery.

The PPRO added that the suspects were arrested for crimes, ranging from rape, armed robbery, as well as kidnapping and illegal possession of firearms.

The spokesman said one Oladimeji Ikotun, 38, was arrested in Plateau State, following an armed robbery incident in Karu Local Government Area of Nasarawa State, leading to the recovery of a Toyota Yaris with number plate GWA184 AA, belonging to one Nwokolo Ebele which was snatched at gunpoint on New Year day.