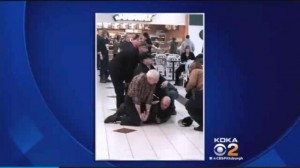 A suspected shoplifter at a shopping mall in Pennsylvania found himself at the mercy of a 74-year-old man who tackled the suspect, brought him down and threatened to break his arm. UPI reports:

Charlie Burton, 74, of Fombell, said he was selling the pens he created from old bullets at the Washington County Sportsmen’s Show in North Franklin Township’s Washington Crown Center when he spotted a disturbance near the food court.

“I was going to the food court to get something to eat, and I went over there and there was this officer. He had a fella up against the counter there, and I saw he was in trouble,” Burton told KDKA-TV.

Burton said he rushed to help the security guard. “I think the officer tripped him a little bit, and I give him a flip and put him down,” said Burton. “He kept hollering ‘You hurt my arm!’ and I said, ‘You better quit fussing around and fighting, I’ll just break it.'”

Police said the suspect, Jonathan Fekete Jr., 29, allegedly fled the mall’s Macy’s store with $200 worth of clothing stuffed into his jacket. “I wonder what he’d do if he knew one of the people he was tussling with was twice his age,” Burton told the Observer-Reporter. The scuffle was photographed by state Sen. Camera Bartolotta, R-46th District. “He had his hand and twisted it and was not letting go,” Bartolotta said Monday. “How dumb do you have to be to shoplift in a mall completely packed with sportsmen?”