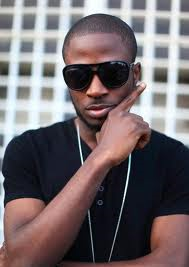 Tunde Ednut is a young singer who has made a name for himself since switching from comedy while in the United Kingdom, to singing. He is an easy-going dude with a high sense of humour.

He recently revealed his best collaborative song, which featured JJC, Ice Prince, Lynxxx and Davido. It was released in December 2012.

He said, “You see, that song is the best collaboration I have ever done in my life. I was alone in the studio and I decided to invite Ice Prince for collaboration. Davido and JJC also came around, so when Ice Prince showed up, we all went into the studio to lay our parts.

“Lynxxx was not around then as he was far away in the UK. I put a call through to him and he asked me to send him the song, which I did instantly. Two hours later, he sent back the song with his voice already on it. The next day, he flew in straight from the airport and met us at the video shoot. That was the easiest collaboration that has ever been recorded.”

He also revealed that he respects D’Banj and 9ice, who he said are his mentors.

“I have just two mentors: D’banj and 9ice and I’ve always tried as much as I can to listen to them and inculcate their vibes,” he said.