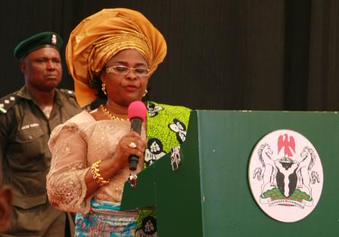 The First Lady, Dame Patience Jonathan, Thursday, stated that her husband and presidential candidate of the Peoples Democratic Party, PDP, in the forthcoming election, President Goodluck Jonathan, deserved the support of women in the country because he had delivered on the campaign promises he made to them in 2011.

She spoke during the PDP Women Campaign Rally held in Makurdi, the Benue State capital.

According to the first lady, “today pregnant women enjoy free antenatal care, we have realized our 35 percent affirmative action and more women are beginning to realize their potentials under this administration”.

Mrs. Jonathan urged Nigerian women to reject the presidential candidate of the All Progressives Congress, APC, and her husband’s main challenger, Muhammadu Buhari, “because a 72 year old man has nothing to offer Nigerians”.

In her remarks, wife of the Benue state Governor, Doorshima Yemisi Suswam, lauded the efforts of Dame Jonathan for carrying women along, particularly in the actualization of 35 percent affirmative action for women.

Mrs Suswam said Benue women were desirous of President Jonathan’s return to Aso Rock because of his impressive achievement in all sectors of Nigeria’s economy.

In the same vein, wife of the Senate President, Mrs Helen Mark, said the women of the state would vote the PDP in all the elective positions, and urged all women to turn out en-masse to vote for the party’s candidates.

Governor Gabriel Suswam, on his part, described the first lady as a reliable woman, who had remained firm in supporting her husband to record resounding success in governance.