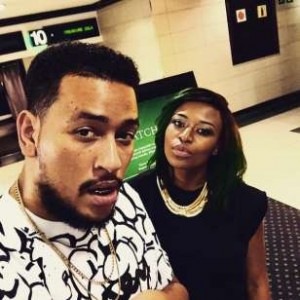 He’s one of the most famous rappers in Africa at the moment and he’s making waves both in South Africa and even in Nigeria.

The very talented South African rapper and his girlfriend of 3 years, DJ Zinhle are expecting their first child as the mother to be is 4 months pregnant

South African rapper AKA who was in Lagos about three weeks ago is having a baby with his DJ girlfriend.

The 27 year old rapper whose real name is Kiernan Jordan Forbes and his girlfriend DJ Zinhle; real name Ntombezinhle Jiyane have been together for 3 years.

Yesterday was the first time he shared a photo of them on Twitter, making their relationship status known to the world.

AKA made the first official announcement on his Twitter page saying ‘movies for 3′ with the emoticon of a baby’s feeding bottle.

In an interview Destiny Connect on February 15, 2015, DJ Zinhle opened up about her 4 months pregnancy with the rapper.

Their baby is expected in July and the couple planned it.

When she mentioned having a baby to AKA he responded: “Yes, you’re my girl, I will never find someone else like you, so let’s do it. Just tell me when”.

DJ Zinhle who is older than her baby daddy met him at a concert in 2012.