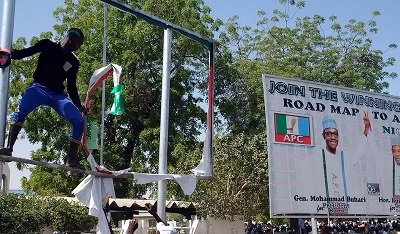 The Borno State chapter of All Progressives Congress on Tuesday distanced itself from the torching of the campaign office of the Peoples Democratic Party’s senatorial candidate, Senator Ali-Modu Sheriff, in Maiduguri on Monday during its presidential candidate, Muhammadu Buhari’s campaign rally.

The party, in a statement on Tuesday, said the campaign office of Sheriff, who is the immediate past governor of the state, was torched by some of his aggrieved supporters, who had some problems with him and not by APC supporters as claimed by the campaign organization of the PDP in the state.

APC, while describing the attack on the building, which is along the popular Sir Kashim Ibrahim Way in Maiduguri, as “highly condemnable and most uncivilised to say the least”, insisted that it should be distanced from such criminality.

The statement by the Chairman of the Borno State chapter of the party, Alhaji Ali Dalori said, “We found it very shocking that the spokesman for the PDP governorship candidate in the state, Inuwa Bwala, rushed to the media just while the attack was going on, pointing accusing fingers at supporters of the APC.

“Bwala even went as far as alleging that the state Governor, Kashim Shettima, ordered the destruction.

“The manner in which Bwala rushed to press has further confirmed the findings of our investigations that the whole thing was orchestrated by the PDP affiliated to former Governor Ali Modu Sheriff with the sole intent of causing political violence so as to create basis for elections not to be conducted in Borno State on March 28 and April 11, 2015.

The party chairman added, “On January 24, 2015, which was the day before the PDP held its Presidential campaign rally in Maiduguri, Governor Kashim Shettima who is the leader of the APC in Borno State, issued a statement he personally signed and made frantic appeal to all citizens of the state, especially youth supporters of the APC, not to disrupt public peace but to respect President Goodluck Jonathan and be of good behaviour.

“Governor Shettima even went further by holding meetings with leaders of the APC in various wards with the sole aim of ensuring APC supporters did not cause a breach of public peace.

“Indeed, Governor Shettima’s efforts paid off as the PDP held an entirely peaceful rally on January 24, 2015”.