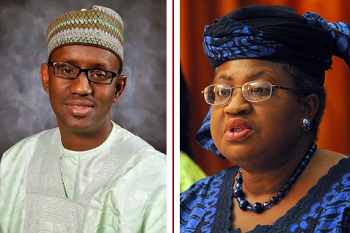 Ribadu made this known in an interview with the News Agency Nigeria (NAN) in Abuja.

“I was baffled and got deluded for anyone to say that N30 trillion got lost. I think we just have to look at what we earn as a country and what our budget had been in these few years and see how possible it is.

“If everything we earned is not up to that within the period she has been the minister, which is about three to four years, then we need to be careful.

“We need to be careful to avoid more damage to our nation, because there are certain things that when it comes out, it will never go back again”, he said.

Ribadu said while working under former president, Chief Olusegun Obasanjo, Okonjo-Iweala was the economic team leader and she coordinated the economic policy of the administration effectively.

“I challenge anybody to say that she stole N1 at that time; we were all there. I was in charge of EFCC and I want to hear anybody say that she did this and that.

“I followed her up till now. I think it is somehow uncharitable for someone to come out to say that such an amount of money was missing under her watch”, he said.

Ribadu, who is the governorship candidate of Peoples Democratic Party (PDP) in Adamawa, said controversies being raised about the nation’s economy was unfortunate, adding that Okonjo-Iweala was of impeccable integrity and well respected.

According to him, when I worked with her, she exhibited a nationalistic attitude that was not questionable and believed in any policy that could take Nigeria and its people high.

The former EFCC boss advised that people must advocate for things that were geared towards the unity of the country and avoid controversies that would cause more harm to the system.

“I am close to almost all of us that worked together as a team and I know that Ngozi continues to do what she knows how best to do, which is to serve Nigeria.

“She managed this economy fairly in spite of all the challenges and difficulties; it is sad for someone to look at Ngozi and said that she has a hand in it (alleged missing funds).

“This pull-down syndrome has to stop and we must manage ourselves very well; I am not happy now with what is going on and I think that if it is politics, I think it is something that is hurting us as people and hurting the economy as well”, he stated.

On allegation that the minister was executing World Bank /IMF policies in Nigeria, Ribadu said she had in no way done such, adding that having worked with the bank was an added advantage for Nigeria.