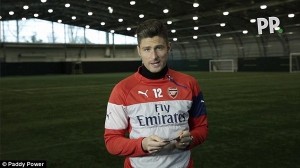 I bet none of you even knew such an award existed.

I’m an Arsenal fan so this article trumps every other one today………hehe.

Anyways, the Arsenal and France international, Olivier Giroud has been named the ‘Hottest Premier League Player’ by Paddy Power inaugural.

According to the Paddy Power’s inaugural poll which gathered results from 250 American women asked to rank 300 players from the English premier league, the Frenchman came out tops.

After accepting his award, the football star thanked his parents for making him look this way and also gave props to his team-mates, barber, make-up artist, tailor and his selfie assistant, Gunners right-back, Mathieu Debuchy.

See another picture below: –