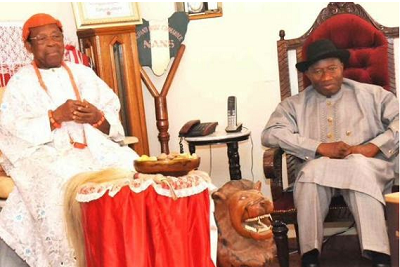 Speaking when the president paid him a courtesy visit at his palace in Asaba, the monarch said the endorsement would ensure Jonathan continues his transformation agenda, as well as implement the recommendations of the National Conference with a view to moving the nation forward.

H said, “We are particularly delighted that you had the courage to set up the National Conference to look into the problems that were setting this country backward. We are convinced that if the recommendations of the conference are implemented they will place Nigeria in its proper place.

“We are giving you our full support to complete your work. We do so, not only because of the giant strided that you have made in transforming the economy, defence and education, but we believe that you are in the best position to implement the resolutions of the National Conference”.

Edozien said on March 28, the day for the presidential election, his stool “will mobilise its children and people to support you not only by words but by deed to make sure that you return to Aso Rock.

“We affirm that support to return you on May 29 as the President of Nigeria. It is our hope that in the next four years, some of the issues in our minds will be fully accomplished”, he added.

The royal father used the occasion of the visit to appeal to the president to dualise the road from Asaba through Agbor and Kogi to Abuja; raise the status of Asaba Airport to an international hub to improve commerce and reduce travel time for the people.

Edozien also appealed to the president to compensate families of victims of the 1967 civil war massacred by the federal troops they came to receive in Asaba, and also establish a federal University in the area.

Requesting for a federal university, the Asagba said “since that request, your administration has created more than 12 Federal universities, why are we forgotten?”

Earlier, President Jonathan had promised that his administration would continue to strive hard “to bring peace, secure our country and bring development.

“As your own son, I will keep faith to the promises that I made to you in public and in private to bring development to the country and Delta state will not be left out”, the president promised.

He noted that his administration established a maritime University in Delta State for manpower development.

Recalling that the police academy, Wudil in Kano State was upgraded to a degree awarding institution in addition to creating 12 other universities in the states that had none, Jonathan told the traditional ruler that with the efforts of his administration, Guinea Worm, Polio Ebola Virus disease had been eradicated.