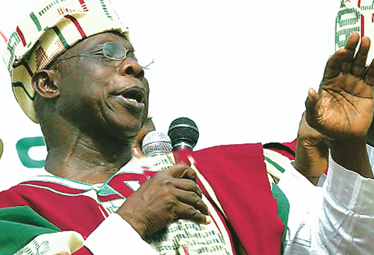 Two chieftains of the Peoples Democratic Party in the South-West, Chief Bode George and Buruji Kashamu, have warned ex-President Olusegun Obasanjo to put an end to his tirades against President Goodluck Jonathan.

The PDP leaders, who incidentally used to be Obasanjo’s allies during his time in office as a democratically elected president, gave the warning during separate press conferences in Lagos on Sunday.

George urged Obasanjo to remember that his own tenure was not perfect, advising him to enjoy old age gracefully.

The former PDP deputy national chairman expressed disappointments that Obasanjo was supporting the All Progressives Congress presidential candidate, Maj. Gen. Muhammadu Buhari (retd.), when it was obvious that Jonathan was a better candidate.

He said, “As a Christian, it is emphasised when Jesus Christ said judge not so that you yourself will not be judged. The judgement is no longer about criticising Jonathan’s policies but he has gone to the extent of saying ‘Buhari will jail you that is why you are afraid’.

“I am holding my breath because in this part of the world, you talk to elders with respect that is why I cannot express myself properly. Baba (Obasanjo) is not a young man. He became the head of states at the age of 39 and he should be about 85 now. I think he should graciously fade away into the midnight.

“The things coming from him are becoming a bit worrisome”.

Furthermore, George stressed the need for the ruling party to sanction Obasanjo for anti-party activities because if he was not punished, other members of the party could do toe a similar path in the future.

“I think the party needs to look into the matter because ignoring it could encourage indiscipline. Imagine what would have happened if somebody within the party was talking like this about baba (Obasanjo) when he was President?”

Kashamu, who is currently in a long drawn court battle with the ex-president, recalled that Obasanjo’s administration took corruption to greater heights. He, therefore, wondered why the former Nigerian leader was critical of Jonathan.

Kashamu, who is the chairman of the Organisation and Mobilisation Committee of the party in the South-West, said: “My immediate reaction when I heard of Obasanjo’s latest outbursts were when did this pseudo-democrat become a defender of democracy? Who has corrupted our electoral and democratic firmament more than Chief Obasanjo? How can the architect of Third Term Agenda accuse anyone of trying to scuttle democracy?

“Obasanjo still wants to continue in power because if the APC, wins, he will be the one that will control everything. All that is going on now is hypocritical”.

Accusing Obasanjo of working to subvert the will of the people, the PDP senatorial candidate for Ogun East District said, “the truth is that the opposition as headed by Chief Obasanjo, have seen the handwriting on the wall. They know that with the postponement of the elections, their evil plot to subvert the will of the people has exploded before their own eyes. They are afraid that they will lose the elections, hence their many unguarded outbursts and unfounded allegations”.