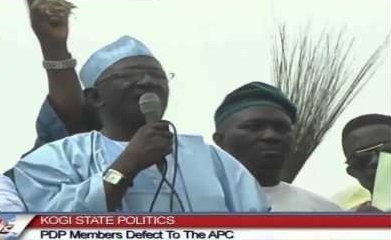 The camp of the People Democratic Party (PDP) in Kogi State was depleted at the weekend as about 5,000 members dumped the party for the All Progressives Congress (APC).

Speaking to a large crowd at the zonal rally of the APC at Anyigba, Kogi East Senatorial District, where the PDP members defected to the opposition party, former governor of the state and APC leader, Prince Abubakar Audu, described the opposition party’s flag bearer, Muhammadu Buhari, as “President-elect” waiting to be sworn in on May 29, this year.

Welcoming the defectors, Audu said the APC has the overwhelming support of Nigerians to lead the country in the next dispensation describing the shift in date of the poll as a postponement of “evil day” for the ruling PDP.

While wondering why the government that said it has delivered on its campaign promises is afraid of election, the ex-Kogi governor said the ruling PDP took the decision seeing that defeat was staring them in the face.