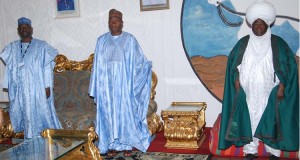 There was a bomb blast, yesterday, at a car park outside the Gombe Stadium, where President Goodluck Jonathan addressed a campaign rally, reports say. The explosion occurred barely three minutes after he left.

A suspected female bomber and another woman died in the blast while six other persons sustained various degrees of injury, according to the Police Public Relations Officer (PPRO) in the state, DSP Fwaje Atajiri.

Confirming the blast to the News Agency of Nigeria (NAN), Atajiri however said that it occurred near a carpenter’s shop in Kashere Street at the Water Board area in Gombe city and not at the campaign rally.

The blast occurred in Gombe on a day explosion rocked three court premises in Rivers State with one of the affected courts burnt down by fire.

An eyewitness of the Gombe blast, Mohammed Bolari, who attended the rally, told Vanguard that the explosion happened at 3:10 pm, three minutes after President Jonathan’s departure.

“The President had just passed the parking lot and we were trailing behind his convoy when the explosion happened, just 100 metres from the bus we were driving in.”

Jonathan’s appearance in the city came just a day after two blasts occurred in the city, including one that targeted a military checkpoint. At least five people were killed.

“It is difficult to say how many people were affected because of the confused struggle by the huge crowd leaving the venue to escape for fear of another blast,” the eyewitness, Bolari added.

“The explosion led to unrest in the city, with crowds of angry youths attacking anyone seen with any PDP sign. They were shouting and denouncing the President’s visit which they blamed for the attack. We had a difficult time passing through these crowds. At one point a crowd threw stones at our vehicle. Some reporters sustained cuts from smashed window screens.”

Also confirming the blast while updating newsmen on the security situation in the country in Abuja, Coordinator of the National Information Centre, Mike Omeri, said: “We got confirmation that there was actually a blast at the Water Board Junction in Gombe town. The incident took place soon after the President and his entourage left the stadium in Gombe. However, casualty figure is yet to be ascertained,” he said.