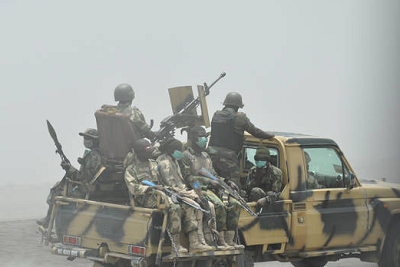 The international rights group, Human Rights Watch, has alleged in its latest report released on Friday that the Nigerian military is guilty of rights abuses against suspected Boko Haram members.

The HRW also accused the Federal Government of failing to provide the military with needed motivation and equipment.

In the report entitled, ‘Tyranny’s false comfort: Why rights aren’t wrong in tough times’, the group’s Executive Director, Kenneth Roth, noted that human rights concerns were crucial to the conflict in Nigeria, where the terrorist sect, Boko Haram, wilfully attacks civilians as well as the country’s security forces.

Roth said, “Oil-rich Nigeria should be able to field a professional, rights-respecting army capable of protecting Nigerians from this abusive group. However, the country’s leadership has left its military ill-equipped and poorly motivated to defend against Boko Haram attacks. When the army has acted, it has often done so in an abusive manner, rounding up hundreds of men and boys suspected of supporting Boko Haram, detaining them in inhuman conditions, and physically abusing or even killing them.

“Many other community members have been forcibly disappeared, allegedly by security forces. When Boko Haram suspects escaped in March from a famously abusive detention centre, Giwa Barracks, Nigerian security forces reportedly recaptured and summarily executed hundreds of them”.

Roth further alleged that the persistent lack of accountability for these atrocities had made it difficult for Nigeria’s allies to provide security assistance for fear of themselves becoming accessory to the abuses.

“The failure of Nigeria’s leadership to rein in security forces has also alienated local communities that might otherwise have willingly provided intelligence to the authorities. Winning the ‘hearts and minds’ of the civilian population will require that the government transparently investigates alleged army abuses and punish offenders”, he said.