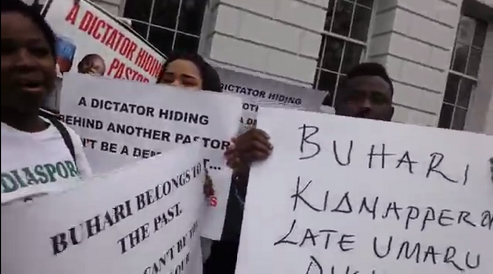 The All Progressives Congress (APC) has condemned, in the strongest possible terms, the needless resort to sheer hysteria by the Peoples Democratic Party, PDP, and the Goodluck Jonathan Administration over the globally-acclaimed appearance of the APC’s presidential candidate, Gen. Muhammadu Buhari (retd.), at the Chatham House in London yesterday.

In a statement issued in London on Friday by its National Publicity Secretary, Alhaji Lai Mohammed, the opposition party said even when it was so apparent that the PDP and the Jonathan Administration were so stunned and stung by Buhari’s well-accepted presentation,​ ​they could have saved themselves from further disgrace by simply keeping quiet, instead of exposing their inanities.

“For the spokesmen of the PDP and the Jonathan Campaign organizations to have rushed to the press to denounce what was a patriotic presentation by a high-regarded Nigerian is not only absurd but a new low, even for those who have lost every sense of propriety in their public actions and pronouncements”, it said.

APC said the level of paranoia of the PDP and the Jonathan Administration was so high, even before the former head of state’s presentation that they went to hire some poor folks to protest at the Chatham House over an issue they knew nothing about.

The party said it was just as well that the rent-a-crowd show boomeranged on the PDP/Jonathan Administration, when those among the scanty protesters who were interviewed said they did not even know why they have come there, with some of them hiding behind their placards of shame!

“The fact that the Jonathan Administration wasted public funds in hiring people to protest against Gen. Buhari’s appearance is another indication of how the commonwealth has been consistently frittered away under the clueless and incompetent Jonathan Administration”, it said, wondering who appropriated the funds that were wasted on the uninformed and disinterested band of protesters.

The statement also described as the worst case of double standard for the loudmouths of the PDP and the Jonathan Administration to question the basis for the APC flag bearer’s appearance at the Chatham House, when the same platform was used a few weeks back by the Administration, which sent National Security Adviser, Sambo Dasuki there to push for the postponement of the 2015 general elections.

“So it is OK for Dasuki to speak at the Chatham House, one of the most important platforms for any statesman, but forbidden for the APC Presidential Candidate to use the same platform? The needless vituperation of the PDP and the Jonathan megaphones against our candidate is precisely the reason the sinking ruling party and the failed Administration it sired have become the butt of jokes around the world.

“Instead of apologizing for seeking to pull the wool over the eyes of Nigerians by saying that Gen. Buhari went to London for medical treatment, these band of poor propagandists persisted in dancing naked in the public square. What a pity?” the party said.

The party commended Mr. Buhari for his well-crafted, well-delivered and patriotic presentation, and his deft handling of the subsequent question-and-answer session at such a big-league platform as the Chatham House, saying despite the barrage of personal attacks and death wishes by the PDP and its agents, the former head of state’s stock has continued to rise both within and outside Nigeria.