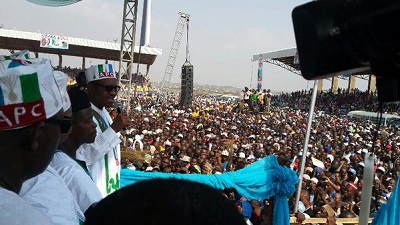 The presidential campaign train of the All Progressives Congress was welcomed to Ilorin, the Kwara State capital on Saturday as an unusual large crowd came out to catch a glimpse of the party’s flag bearer, Gen Muhammadu Buhari (rtd).

The train, which touched ground at the Ilorin International Airport at about 10:40 am, could not get to the Emir of Ilorin, Alhaji Sulu Gambari’s palace until around 12: 41 pm; a distance of less than five kilometers.

This was as a result of the mammoth crowd of supporters that thronged the airport and also lined the road that leads to the palace.

The presidential team, which comprised of Buhari, his running, Prof Yemi Osinbajo; National Leader of APC, Asiwaju Bola Tinubu; Governors of Kwara, Osun and Rivers state, Alhaji Abdulfatah Ahmed, Ogbeni Rauf Aregbesola and Chibuike Amaechi, who is also the Director-General of the APC Presidential Campaign Organization, eventually arrived the Metropolitan Square, venue of the event at about 1.35 pm.

Their arrival threw the whole arena into a frenzy as shouts of Buhari and Ahmed rented the air.

Addressing the crowd, Buhari said that the desperation in the Peoples Democratic Party (PDP) is frightening.

He added that “there is so much resources in their hands and with their coercive resources at their command, we have a problem and God’s willing we will overcome that problem”.

The APC presidential candidate warned that a vote for PDP is tantamount to ruining the future of the country and in coming generations.

The general said: “The most important thing is that you should vote. Make sure you get your permanent voter cards and on the Election Day you come out and make sure you vote and that your vote counts. If you allow the PDP by any chance to continue to run this country, you are ruining yourselves and you are ruining your country”.