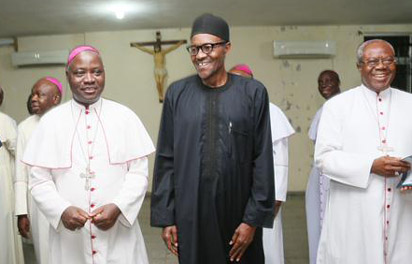 The presidential candidate of the All Progressives Congress (APC), Muhammadu Buhari has re-affirmed that he is committed to ensuring that religious freedom in Nigeria is not compromised and that Nigeria remained a multi-religious state where every individual was free to practice his religion of choice.

He made this known at an “Episcopal” Town Hall Conversation with representatives of the Catholic Bishops’ Conference of Nigeria in Abuja.

The APC presidential candidate stated that although he had been severally and consistently vilified and maligned, he had no personal religious agenda, neither would he support any moves by anybody or group of persons to either Christianise or Islamise Nigeria.

“I will not condone any initiative that seeks to promote one religion over the other,” he promised in his speech, titled “One Nation bound in Freedom, Peace, Unity and Love”.

Speaking earlier while welcoming Buhari, President of the Catholic Bishops Conference of Nigeria, Bishop Ignatius Kaigama, who is also the Archbishop of Jos, said that the Catholic Bishops’ Conference of Nigeria believed in the unity and progress of Nigeria. He expressed regret that a wide communication gap exists between the leaders and the people. However, he lauded the conversation, as he it indicated the willingness to establish a sustainable communication platform.

Buhari was accompanied to the event by his running mate, Yemi Osinbajo, the Director General of the APC Presidential Campaign Council, Governor Rotimi Amaechi, and other members of the party’s presidential campaign.