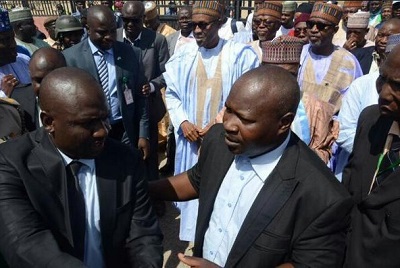 Presidential candidate of the All Progressives Congress, APC, Muhammadu Buhari, on Monday met an enthusiastic crowd in Maiduguri, the Borno state capital, as a new phase of his rally tour of Nigeria began.

Accompanied by several members of the APC including the Director-General of his campaign, Gov. Rotimi Amaechi and Audu Ogbeh, the Governor of Borno State, Kashim Shettima was also on hand to lend his support to the campaign party.

Tens of thousands of supporters thronged the streets of Maiduguri, defying the threat of insecurity and cheered Mr. Buhari as he made his way through the city.

Many of his supporters ran after the vehicles chanting their support for the candidate.

The presidential flag bearer acknowledged their show of support during his speech as he visited the Emir of Borno, Abubakar Ibn Umar Garbai El-Kanemi, at his palace telling the audience: “The distance between the airport and the palace has never been this far; I am grateful for the welcome”, he said. He also acknowledged the economic difficulties facing the region and stated that the Buhari/APC goal was to be a catalyst for meaningful change in the region and said to the crowd, “The young men that followed the convoy sweating, they should be gainfully employed – that, is APC’s priority”.

As a former military governor of the North Eastern State, Mr. Buhari acknowledged his close ties to the region, and expressed his deep concern for those displaced by the terrorist group, Boko Haram.

He said, “I can trace my roots here, and my relatives are still in Kukawa. I was also lucky to be here once as governor of the North Eastern State”.

He also made a promise to those displaced by the fighting saying, “People in Baga and others will be liberated, returned to their homes, and will see a government genuinely concerned about their welfare”.