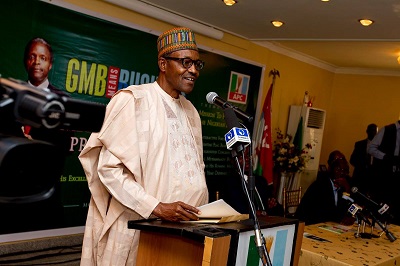 The Presidential Candidate of the All Progressives Congress, Maj. Gen. Muhammadu Buhari (retd.), on Thursday jetted out of the country via the Nnamdi Azikiwe International Airport, Abuja, to the United Kingdom on a working visit.

A statement from his campaign office said in the course of this visit, Buhari would hold meetings with key members of the British political establishment and interact with some global institutions with stakeholder interest in the affairs of Nigeria.

Meanwhile, the APCPCO has said that it has evidence that a top management staff of the Nigerian Maritime Administration and Safety Agency (NIMASA) is behind the hate campaigns against Gen. Buhari and his family aired in the recent documentary by African Independent Television and Nigeria Television Authority.

The campaign organization said it has confirmed that the agency was the sponsor of all the dirty campaigns against the APC presidential candidate on AIT, NTA and several other media platforms.

While saying that the action contravenes the NIMASA Act, the Public Service Regulations, and the Independent National Electoral Commission Act 2010 as amended, among others, Shehu decried the situation where a government agency uses public funds to sponsor a campaign of calumny against its candidate, which it said is not only illegal, but should also be condemned.

He said that the action should be investigated by the Joint Committees of the National Assembly on Marine Transportation, stressing that if these claims were found to be true, disciplinary action should be taken against the agency and its leadership.

The statement said: “It is a well-known fact that the Director General of the Agency, Mr. Ziakede Patrick Akpobolokemi was President Goodluck Jonathan’s and a well-known ex-militant’s errand boy.

“He was appointed there for the sole aim of satisfying an ex-militant’s camp, an assignment he has carried out well to the satisfaction of those who put him there through the award of a concessionaire phantom PPP project.

“Under this contract, a certain company, (Global West Vessels Specialists Ltd) was handed the legal responsibility of the Nigerian Navy of protecting the Nation’s Waterway and NIMASA’s Maritime Security function to the surprise of all industry observers and yet fail woefully in offering the necessary protection for the theft of Nigerian Crude Oil, which has only increased since then among other sea related crimes”.