Home Metro News Corruption Will Have No Place, The Corrupt Will Not Be Appointed into...
Facebook
Twitter
WhatsApp 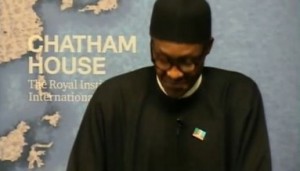 The presidential candidate of the All Progressives Congress (APC), Muhammadu Buhari, Thursday, promised to run a private sector-led economy and end corruption if he wins the March 28 election. He said this in a speech at the Chattam House, London.

“We will run a private sector-led economy but maintain an active role for government through strong regulatory oversight and deliberate interventions and incentives to diversify the base of our economy, strengthen productive sectors, improve the productive capacities of our people and create jobs for our teeming youths,” Buhari said.

The private sector has been proven to be a major driver of growth across the world. The UNDP, in a 2004 report titled Unleashing Entrepreneurship: Making Business Work for The Poor, noted that the private sector can alleviate poverty by creating employment and income growth. It can also empower poor people by improving their quality of life. For a country like Nigeria where 33.1 percent of the citizens live in extreme poverty, impressive private sector growth will propel it faster towards the actualisation of its economic dreams.

Buhari noted in his speech that a good place to start the repositioning of Nigeria’s economy is to swiftly tackle waste and corruption. He promised to lead the way in ridding the country of the two ills if elected.

“Corruption will have no place and the corrupt will not be appointed into my administration,” the former military head of state said.

Despite the presence of anti-graft agencies like EFCC and ICPC in Nigeria, Africa’s largest economy, corruption has almost become a component of doing business in the country. Although, its natural resources and large consumer size makes Nigeria an investment hostspot, corruption has made it harder for businesses to operate and has also discouraged the inflow of foreign investments. The country ranked 136th on Transparency International’s Corruption Perceptions Index 2014, scoring 27 percent. The perceived level of public sector corruption was rated on a scale of 0 to 100, where 0 is very corrupt and 100 is very clean. The APC presidential candidate, however, promised to block leakages as a result of graft and use money saved from this to “fund social investment programmes in education, health and safety nets such as free school meals for children, emergency public works for unemployed youth and pensions for the elderly.”

If Buhari wins the presidential election, Nigerians and indeed the world will be watching, ready to hold him to his words.

The general elections were earlier scheduled for February 14 and 28, but the country’s electoral commission postponed the polls until March 28 and April 11, citing security concerns. Since the postponement of the general elections, the military has recorded massive gains against Islamist militant group Boko Haram whose violent campaign has led to the death of more than 13,000 persons in the country. While several towns taken by the group in Nigeria’s northeast has been reclaimed, bomb attacks believed to have been perpetrated by members of the sect has intensified in recent days.

The APC has insisted that elections must hold at the new dates as the initial delay was regarded as a ploy by the ruling People’s Democratic Party (PDP) to manipulate things in its favour.