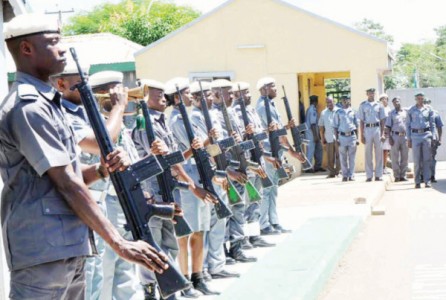 The new Customs Area Controller of the Seme Command, Comptroller Ndalati Mohammed has urged traditional rulers, chiefs and members of the border community within and around Seme to join hands with the customs in the fight against smuggling and other related vices.

Comptroller Mohammed, who made the call during a recent familiarization visit to the palaces of the Alapa of Apa Kingdom, Oba Oyekan Ilufemiloye Poosi and Aholu of Kweme Kingdom, Oba Sejiro Olalekan James, described the task of policing the border as one that concerns every citizen. He noted that security, safety and general peace is everybody’s business.

During the visits, the monarchs promised to fully identify with the customs in its duties of suppression of smuggling, collection of revenue for government and facilitating legitimate trade, adding that their palaces are always open to Mohammed and his officers.

Speaking on the Command’s revenue for 2014, Mohammed said : “The Command collected a total of N9.6 billion as revenue in 2014, which represents 9.12 per cent increase over the N8.4 billion revenue collected in 2013.

“The significant improvement can mainly be attributed to the revenue accruing from the Vehicle Import Transit regime introduced by the Comptroller General of Customs, Abdullahi Dikko Inde last year.”

Meanwhile, the Command has destroyed seized and unwholesome 1,805 cartons of poultry products, with a duty paid value of N13.5 million, as well as bags of expired flour and used textile materials intercepted while being smuggled into the country from Benin Republic on January 24, 2015.

The destruction which was done through burial after pouring caustic soda on the products to hasten decomposition and deter scavengers from digging them up for sale or consumption, was witnessed by officials of Port Health Service, Agricultural Quarantine Service, DSS and National Agency for Food Drug Administration and Control (NAFDAC).