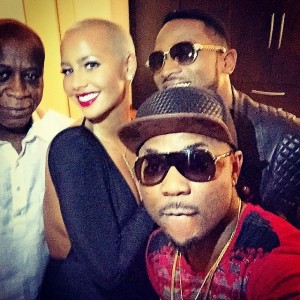 As expected, news has gotten to D’banj about the alleged early exit of Amber Rose from his 10th anniversary party.

The Kokomaster has come out to slam the rumors through his publicist, Bukky Karibi-Whyte, who released a statement on the issue.

“My Dear Media Friends that attended our event. I am sending this email to clear the air on some stories that circulated regarding Amber Rose leaving D’banj’s Party. ‘Please be advised that Amber Rose DID NOT storm out of the venue as indicated by some blogs. She arrived in Nigeria that same evening from another show in Amsterdam (5.50pm), went straight to her hotel, and then eventually came as D’banj’s date to the party. ‘Amber Rose did leave early because she was tired (long flights) and was escorted back to her nearby hotel by D’banjs entourage and security.