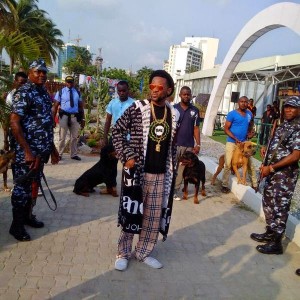 If you were in Lagos yesterday for D’banj’s 10th anniversary concert, you would confess that it was way better than the Koko concert of last time.

The Kokomaster D’banj, showed off what he’s made of at his 10 year anniversary concert. Displaying his awards and accolades, all the things he has achieved in the last 10 years.

D’banj was also noticeably surrounded by heavy security men and mean dogs before the event.

See more photos from the venue below: –