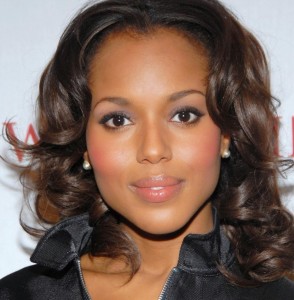 The welcomed their baby last year and after months of hiding, we finally got to see a photo of their bundle of joy.

Kerry told InStyle in a recent interview that her mother in-law gave her a Igbo name.

Kerry said “Nnamdi’s parents are Nigerian immigrants. His father passed when he was young. When you marry into the Igbo culture, you get a new name. My name is Ogechi. I wear it on a necklace my mother-in-law gave me.”

Kerry also said she’s not the only one with Igbo name in her house.

Kerry Washington said “My daughter’s name is Isabelle Amarachi. Isabelle is my grandmother’s name. She was a bad-ass. She’d be scowling if she knew I called her that, but she was an immigrant from Jamaica who raised seven children alone in the Bronx. Isabelle’s middle name, Amarachi is Igbo for ‘God’s grace’.”