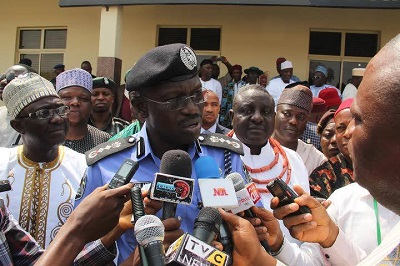 Ahead of the general elections in this month of February, the Nigeria Police said on Monday that it would bring together the various political parties and their candidates to sign another peace accord.

Speaking with journalists before the commencement of the meeting, Abba said the accord was to get the candidates to prevail on their supporters to eschew acts of violence before, during and after the elections.

The peace accord being put together by the police is coming on the heels of a similar one initiated by a former Secretary-General of the United Nations (U.N), Mr. Kofi Annan, last month, which was signed by leaders of all the political parties and leading presidential candidates.

“One of those things we will do in the next few days ahead of the elections is to bring the politicians, particularly the contestants, together to sign a peace accord.

“This will be done so that their members will understand that this game is played in peace, not in pieces.

He also said the meeting would be replicated at command levels across the country.

“Once that is done and it is done wholeheartedly, their followers will take it for good and be partners in activities that would ensure peace during the period”, IGP Abba said.

On those relocating from their states of residence for fear of crisis, Abba urged them to remain where they were as the police and other security agencies were working to ensure law and order throughout the elections.

“Movement from one part of the country to the other is not the best solution; the best solution is for all stakeholders to come together to work for peace. We want to assure people living in Nigeria that we will work hand-in-hand with our colleagues to make sure that the peace is maintained.

“We will make sure that there is law and order during the elections and the days that follow”, he said.

The police boss also called on politicians to preach peace to their followers just as he assured that there would be no rivalry among the various security agencies involved in the election as they would be coordinated under the Inter-Agency Consultative Committee on Election Security (ICCRS).