The National Chairman of the Peoples Democratic Party, PDP, Alhaji Adamu Muazu, has said that his party will continue to support the Independent National Electoral Commission (INEC) in its quest to conduct free and fair elections always, following the announcement of the postponement of the polls by six weeks by the electoral body.

The INEC Chairman, Prof. Attahiru Jega, in a highly anticipated press briefing on Saturday night, explained that while the commission was prepared to conduct the elections, it had to bow to the position of the security agencies that they would not be able to provide security conducive for the polls to hold as scheduled.

But Mr. Muazu faulted Jega for shifting all the blame for the elections postponement on the security advice he received.

“He refused to take any fault for disenfranchisement of Nigerians through PVC distribution. Shifts all fault to security advice”, the PDP national chairman said via his Twitter handle @muazuaa 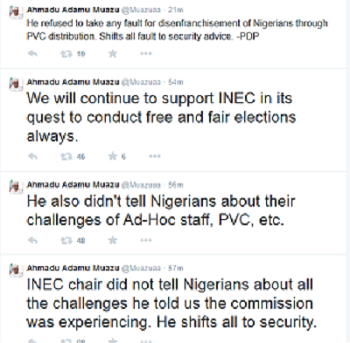