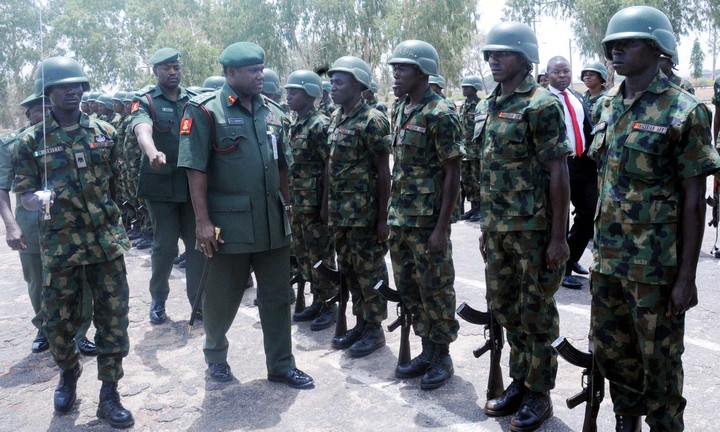 The Chief of Army Staff, Lt-General Kenneth Minimah, on Wednesday said victory over Boko Haram is an achievable feat before the commencement of general elections next month.

Mininah, who stated this during a surprise visit to Baga town in Kukawa Local Government Area, which has just been liberated from Boko Haram’s control, said the troops would continue the clampdown on the insurgents elsewhere in the country with the aim of putting an end to their siege.

The army chief, who said he was impressed with the recent successes of the Nigerian military in the battle against Boko Haram, added that the displaced residents of the reclaimed community should be able to return to their homes before the general elections on March 28 and April 11.

Minimah, who was accompanied by senior military officers, told journalists in Maiduguri after the visit to Baga that, “It is achievable to end the Boko Haram activities very soon because we are still within the six weeks frame work. But we should not see the six weeks as a must-accomplish time; this is war and we will try and do  whatever possible to liberate more areas so that displaced citizens can go and resettle and possibly vote during the elections.

“Whatever is possible, we will do, but the six weeks should not be taken as if it must be accomplished. But we will try as much as possible to liberate the areas under Boko Haram”.

Addressing the troops in Baga, the COAS informed them that the President and Commander-In-Chief as well as Nigerians were proud of them.

He said, “My visit here is on confidence building and to inform you that ‎the entire Nigerians are singing your praises for your courage and urge you to keep up the tempo. You have made Nigerians proud.

“From today, it is never again for insurgents to take hold of any of our territory. Today, it is going to be victory all the way because the war is almost ended.  From here, we move to retake Gwoza, Marte and Madagali.

“With this, there is going to be no more Boko Haram. The slogan is ‘never again’ and even the President shares in this slogan”.

The Chief of Army Staff promised that every soldier that participated in the liberation of Baga would enjoy an instant promotion to the next rank.

“As a way of commending your courage and patriotism, every soldier that participated in the Baga operation, whether dead or alive, has been promoted to the next rank”, he said.

The soldiers were full of praises and jubilation as officers conducted the COAS and his team round parts of the town and an inspection of some of the weapons and vehicles recovered from the dislodged terrorists.