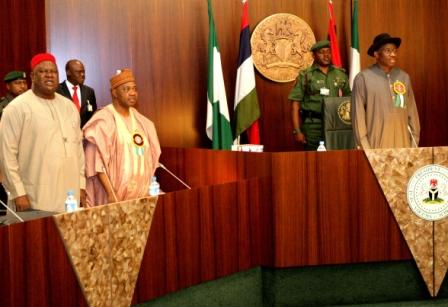 The nation’s transport sector is set to receive a boost with the approval of eight bills at the Federal Executive Council (FEC) meeting presided over by President Goodluck Jonathan on Wednesday.

Special Adviser to the President on Media and Publicity, Dr. Reuben Abati, coordinated the post-council briefing that was addressed by the Minister of Environment, Mrs. Lawrecia Mallam; Minister of Industry, Trade and Investment, Olusegun Aganga; Minister of Works, Mike Onolememen; Minister of Agriculture and Rural Development, Akinwunmi Adesina; and the Minister of Transport, Idris Umar.
‎ ‎
‎According to the presidential spokesman, FEC had directed the Attorney-General of the Federation, Mr. Muhammed Adoke (SAN), to forward the approved bills to the National Assembly for enactment into law.

He said 15 hectares of land had already been provided in Alape, Kabba Bunu Local Government Area of the state.

Wada added that the project was expected to provide about 10 job opportunities for people of the state.

‎Speaking on the Great Green Wall Project, the Minister of Environment said it will cover 11 frontline states in the northern part of the country.

Aganga described the approved bills as “game changers”, adding that they are priority bills of the economy.