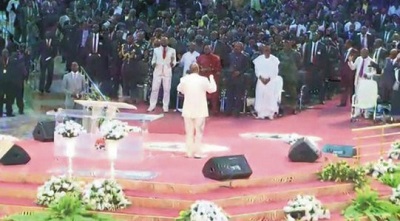 The Living Faith Church, also known as Winners Chapel, on Sunday dismissed reports that its founder, Bishop David Oyedepo, said a prayer of unleashing the gate of hell on anybody who opposed the re-election of President Goodluck Jonathan.

President Jonathan had visited the headquarters of the church at Ota, Ogun State, last Sunday, but shortly after, there were reports that the flamboyant cleric allegedly openly declared support for the president’s re-election.

However, in its first official reaction to the rumors since it first started, the Resident Pastor of the church, Pastor Ubong Ntia, said the reports “were far from the truth”.

The church said those spreading the rumour should have obtained the video clips of the service first and verify the claim.

The church said the rumours were intended to cause mischief and to dent the image of Oyedepo and as well as to create confusion in the country.

It also said the Bishop did not call President Jonathan to the altar for any special cleansing or deliverance.

“President Jonathan along with his entourage, like the rest of the congregation, was upstanding, and prayers were made for him and all those in authority, and the nation”, the statement read.

Recalling Jonathan’s visit to the church, the statement said, “The President and his entourage arrived Canaan Land (Faith Tabernacle) for the third service at about 9.30am. He and his team were ushered in and asked to occupy the front seats alongside the Resident Pastor and other senior pastors. Thereafter, in honour of the President, Bishop Oyedepo invited President Jonathan to ‘bring a word of greeting’ to the congregation.

“President Jonathan spent approximately six minutes in his address, clearly stating that he would be careful not to sound political so that his visit and intentions would not be construed as electioneering campaign. In his brief speech, he adulated the Ministry and person of Bishop for the mighty works of faith, prayer for Nigeria and educational milestones the Living Faith Church has engendered for national development. He then expressed his belief that the elections of 2015 would go peacefully, while also asking for the people of God to pray more”.