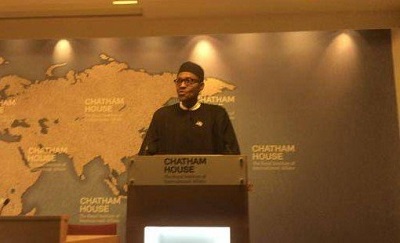 Presidential candidate of the All Progressives Congress (APC), General Muhammadu Buhari (retd.), has said that he would not grant amnesty to the dreaded Boko Haram sect that has claimed responsibility for the death of over 15,000 Nigerians and displaced millions of others since 2009.

Buhari said this while responding to questions after his lecture at Chatham House in the United Kingdom yesterday.

“I think I will not go to that office with that promise. I have said in my address how, at least 13,000 Nigerians have been killed by Boko Haram, how millions of them have been displaced and are now kept in different camps called Internally Displaced Persons camps.

“Schools have been burnt, there is so much disruption to normal life; people cannot farm and where they are able to farm, they cannot harvest. So, granting amnesty to Boko Haram will be unfair to the system”.

The APC flag bearer, who described himself as “a former military ruler and a converted democrat”, however stated that any insurgent caught would “be given the chance in civil courts to be properly prosecuted”.

He added, “We will secure Nigeria. At no other time in our history has Nigeria been this insecure. Boko Haram has sadly put Nigeria on the terrorism map, killing more than 13,000 of our nationals, displacing millions internally and externally, and at a time holding on to portions of our territory the size of Belgium. What has been consistently lacking is the required leadership in our battle against insurgency”.

Asked how he planned to tackle the extremist group, if elected president come March 28, Buhari said his government would “pay special attention to the welfare of our soldiers in and out of service, give the military adequate modern arms and ammunition and improve intelligence gathering to choke its financial and equipment channels”.

He also said his regime would look into the root causes of insurgency “by intiating a comprehensive economic development plan promoting infrastructural development, job creation, agriculture and industry in the affected areas”.