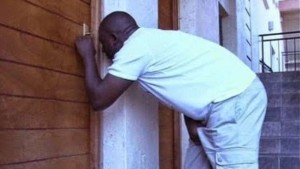 A man in Oke-Ira, along Ajah area of Lagos state was allegedly caught peeping at a married woman while she was having her bath and received the beating of his life afterwards. Leadership Newspaper reports:

The culprit named Koffi, a Ghanaian Koffi was caught peeping at a married woman, Kudi who was taking her bath at Badore road, Ajah, Lagos.

Koffi was caught by the Kudi’s husband, Mufutau who beat him mercilessly.

Mufutau told Leadership Newspaper that the Ghanaian was fond of peeping at both single girls and married women but luck ran out on him when he caught him in the act on the evening of Tuesday February 17.

Mufutau said he was returning from work when he saw somebody peeping through a hole in the makeshift bathroom and snuck up to the man only to realise that he had been spying on his wife.

“I gently tapped Koffi on the hand and I asked: ‘What are you doing here? He attempted to beg me not to reveal the secret but he never knew I’m a different kind of person because I had to slap him twice before attracting the neighbours,” Mufutau revealed.