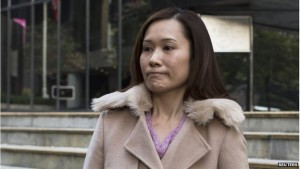 A woman in Hong Kong who was convicted of abusing her Indonesian maid has been jailed for six years. Law Wan-tung was found guilty earlier this month of causing grievous bodily harm, criminal intimidation and failure to pay wages to her maid. BBC was there:

The maid, Erwiana Sulistyaningsih, drew global attention last year when she returned to Indonesia in need of hospital treatment.

During the trial, she described being beaten and starved by her employer.

The case drew intense scrutiny in Hong Kong, where a significant number of families rely on domestic helpers.

The city’s residents employ about 300,000 maids from other parts of Asia, mainly Indonesia and the Philippines.

During the six-week trial the court heard that Law beat Ms Erwiana with various household objects and deprived her of proper food, allowing her only a small portion of rice and bread.