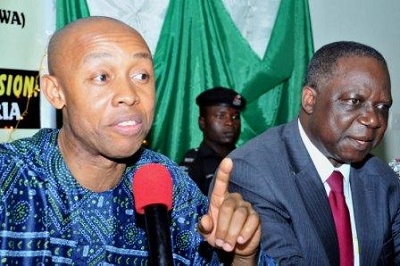 The planned probe into the allegation by former President Olusegun Obasanjo that President Goodluck Jonathan was training and arming a killer squad for 2015 general elections has been frustrated, the National Human Rights Commission (NHRC) has said.

NHRC Chairman, Prof. Chidi Odinkalu, who said this in Abuja at the weekend, blamed the uncooperative attitude of the Attorney General of the Federation (AGF), Mohammed Adoke (SAN), and Obasanjo for the obstacles facing the probe.

Odinkalu said the AGF and the former president, who are key to the investigation, refused to honour NHRC’s requests to furnish it with the information and evidence it required to carry out the investigation.

It would be recalled that in December 2014, Obasanjo had, in an 18-page open letter to Jonathan, accused the president of, among others, keeping over 1,000 people on his political watch list, secretly training snipers and other armed men as well as acquiring weapons for political purposes.

The president, in an equally scathing and lengthy response, denied the allegations and accused Obasanjo of, among others, making unfounded allegations that could be considered treasonable.

The NHRC boss said the commission, in trying to afford all concerned parties the opportunity to make representations, had written to both men twice, but without response from them.

“The process is facts-based. It is evidence-led. We are not going to sit down here and manufacture evidence. We wanted to give everybody a chance before proceeding. Again, we wanted to convene the public hearing. But again, it was close to the elections.

“So, we took a deliberate decision that we did not want to make that a factor in the elections. After the elections, we are going to convene that hearing. But if the attitude continue, which is that neither side is willing to give us evidence, we will adjourn it sine die (indefinitely)”, he said.