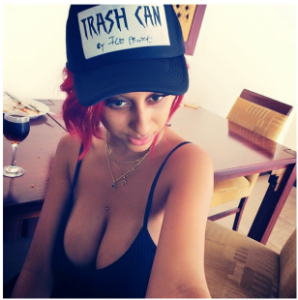 If you think just like me, then you’d probably not even notice the face-cap she’s wearing; all I can see is that big black shirt………LOL!!!

Anyways, Ice Prince’s girlfriend, Maima is taking the driving seat as she helps promote his EP in a very warm and BIG way.

His voluptuous girlfriend took to her Instagram page to promote Ice Prince’s new album called the Trash Can EP.

In the photo, Maima Nkewa who is also a single parent with a son revealed major cleavage and wore a snapback that celebrates Ice Prince’s recent work.

Photos showing his lover Maima only surfaced in January 2015, especially a photo she shared on January 3, 2015 of Maima and Ice Prince’s son Jamal captioning it “My Love”. 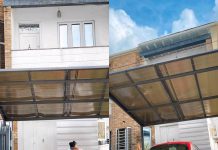 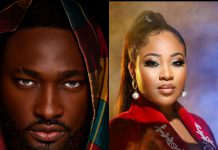