With recent happenings in the political terrains of our beloved country, Nigeria, here is another one from Chief Bode George, a prominent South West leader of the Peoples Democratic Party. 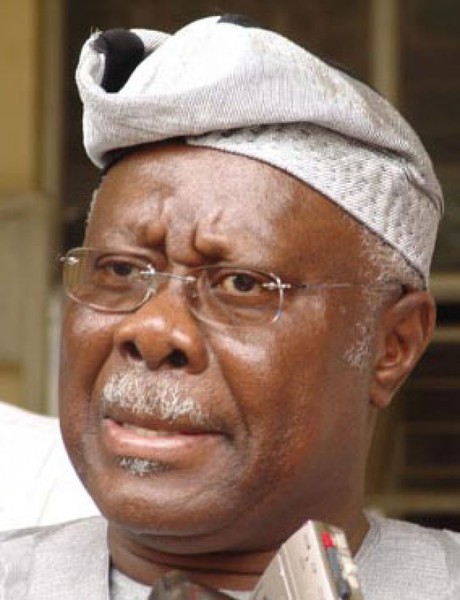 In a new interview with Punch, Bode George talked about various things including the recent proclamations of former President Olusegun Obasanjo, election postponement and all the dramas accompanying it, military surrounded Asiwaju Bola Tinubu’s house and other national issues. Bode George also talked about politics in Lagos and what he thinks about it….

Read the engaging, explosive and mind blowing excerpts from the interview below:

Former President Olusegun Obasanjo says President Goodluck Jonathan plans to perpetuate himself in government like the former President of Cote d’Ivoire, Laurent Gbagbo. What do you think of this comment?

He (Obasanjo) says he is a Christian and as a Christian, it is emphasised in the New Testament of the Bible where Christ said judge not so that you will not be judged. But his judgment is no longer about the policies of Jonathan. He has gone down to the extent of saying Maj. Gen. Muhammadu Buhari (retd.) will jail you (Jonathan), that is why you are afraid. I am holding my breath because in an African setting, you talk to elders with respect and that is why I am trying to get the right words to describe my feelings. Baba (Obasanjo) is not a young man. He was Head of State at 39. So averagely, he should be about 84 or 85 and I am requesting that he should graciously fade away into the midnight. In the Bible, Romans chapter 13 states clearly that we should pray for those in authority. It says pray for your leaders so that they don’t run aground. So, to me that is my own interpretation. If baba (Obasanjo) had attended the Council of State meeting in Abuja, where they were very well briefed, and that it was decided that only the Chairman of the Independent National Electoral Commission, Prof. Attahiru Jega, that could pronounce a postponement and that he should go and come up with a decision and Jega addressed a press conference. Now to start comparing our President with Gbagbo in Cote d’Ivoire is unjust, unsavoury and unfair because what is the population of Ivory Coast? What are the tribal sentiments of Ivory Coast? Are they the same here? I want to plead with Baba. God has been kind to him and he has served his own time. I don’t want to conclude that his life will be like King Saul in the Bible. I pray it will not be so. Baba has played his role. No generation can finish any job. Nation building is a continuous exercise. You come, do your own and go back into history.

Apart from the issue of insecurity which Jega gave as the reason for the postponement of the elections, do you think INEC was ready to conduct the elections on February 14 and 28?

I granted an interview recently and there were two posers that I gave to Jega. Thank God Jega is a professor. He told us that there was an 88 per cent collection rate in Borno State where there is massive insurgency as well as in Yobe and Adamawa states. Here, where there is calmness and civility, only 30 something per cent of the populace had collected PVCs. It is just improving. I think as of last Friday over three million had collected as against 5.6 million. And he is saying we are ready. Without the Permanent Voter Cards, you are immediately disenfranchised. Ask Jega that as a professor, will it be fair to conduct an examination whereby you have (students who have) covered 80 per cent syllabus and another class where you have (students who have) covered only 30 per cent syllabus. Is it fair?

The other question is this issue of card readers. Have they been tested? I am talking as an electronic engineer of 48 years in practice. You just bought equipment from China and the last time it was tested was in China. Our own environment is not the same. Look at the vagaries of the temperature here from the swampy areas of the South and the savannah in the North. Who has tested the equipment? Now, I am not saying they will not all work but if there are almost 9,000 polling units in Lagos, is he saying all the 9,000 card readers will be functional? If the card readers fail to work in some polling units, what shall we do?

Why did the military surround former Governor Bola Tinubu’s house?

If Bola Tinubu finds his way into national government, I will go on exile. He hasn’t the temerity and the calmness of mind. They don’t even know what to do in power. Because the vice-president is his boy, he will just order that Bode George should be picked up. He said soldiers came to him but he must have been dreaming. When he said soldiers had surrounded his house, I drove down there because my house is not too far from there. I know the hierarchy of the military and its behaviour. That they surrounded his house is lie number one because on either side of his house are two buildings. There is also one at the back. So, I wondered where the soldiers were hiding. Why would you lie for public consumption? So when I got down there, I knew that his spin doctors were working. These days people go on the social media and the story went viral. Why would he (President Godluck Jonathan) from Abuja, be running after Bola? Let them be very careful about the statements they are making. More so, if Obasanjo is now linking Jonathan with what happened in Cote d’Ivoire and coup; not in this 21st Century. That is past and gone forever. No nation goes through this kind of tribulation twice and survive. We have had our own experience of Civil War and I pray that God does not direct our minds in that direction and our people have to watch their mouths.

The general perception in Lagos is that the governorship race is between yourself and Tinubu.

Absolutely not! In the PDP, no individual owns the party. I happen to have been the first national vice chairman, South-West PDP, and then became deputy national chairman South and then deputy national chairman for the whole country and having done that, they have honoured me that as long as I remain in the party, I remain a member of the Board of Trustees and I am the only one representing the South-West in the national caucus forever. That is a great honour in our party but I don’t decide who becomes a candidate. Primaries were conducted and in this particular case, the voice of the people became louder than anybody’s. I am not like Bola Tinubu, I don’t have the papers of the party in my pocket. I don’t even have a veto power. But the other side doesn’t practice democracy. We have friends that are members there. Jimi Agbaje has no godfather but will not behave like an authoritarian governor.

But Senator Musiliu Obanikoro said you were the one that imposed Agbaje.

Jonathan’s perception in the South-West is not as favourable as it was in 2011. There has been blame on you and other PDP Yoruba leaders for allowing Buhari to increase in popularity in the South-West.

If you had said this about two or three weeks ago, I would have agreed. I got these feelers straight to my face. People came to me and said they would vote for Agbaje but they will not vote for Jonathan because he had done nothing for us here. And I explained that there is a general misunderstanding of the concept of operation in this country. The long periods of military rule presupposed that the Head of State was responsible for everything and it is that same thinking that is responsible for this situation. We are all hands on deck explaining the differences between military governance and democratic governance.

Highly educated people, my age groups, were asking me this question but I explained to them that 60 per cent of the impact the President will have on you is through the federal allocation to your state. Does he give every state and every local government allocation? Yes. They collect it religiously every 30 days. In the area of security, he guarantees it. It is only three states in the North-East battling insecurity. There is peace and he guarantees that. What of infrastructure? All federal roads in Lagos from Alfred Rewane in Ikoyi all the way to Third Mainland Bridge and Ebute Meta are federal roads. Are they like the roads in Somolu and Akowonjo?

It would be recalled that just recently, the South West chairman of the People’s Democratic Party (PDP) condemned the statement by Olusegun Obasanjo that the elections were shifted in favour of Goodluck Jonathan.