Barely a year after a recruitment exercise conducted by the Nigeria Immigration Service, NIS, led to a stampede and deaths of many of applicants, reports say the NIS is set to embark on a similar exercise.

This detail was disclosed by the Public Relations Officer (PRO) of NIS, Chukwuemeka Obuah, a statement issued on Monday after advertorials were placed in major media outlets at the weekend.

“The Presidential Committee To Assist In Immigration Recruitment on Monday February 9, 2015 placed advertorial in some national dailies requesting applications from suitable Nigerians for enlistment into the Nigeria Immigration Service starting from 9 February, 2015 to 22 March, 2015. Note the application is free and must be done online,” Obuah stated.

It would be recalled that the 2014 Nigeria Immigration recruitment tragedy occurred on Saturday, 15 March, 2014, when 6.5 million people in all 37 states of Nigeria (including the FCT) stormed various recruitment centers in the country for the 4000 vacant positions in the service.

It was reported at that time that no fewer than 16 job seekers were confirmed dead in the incident, while several scores of people were injured.

According to reports, what caused the deaths were overcrowding, stampede, exhaustion, and impatience of the applicants.

According to the National Bureau of Statistics, at least 23.9% of Nigerians are currently unemployed (about 40 million).

All applicants for the exercise paid 1000 Naira (about $6) before they could complete their registration for the test. They were also mandated to provide a medical report before being considered eligible for the exercise. Since the Nigeria Immigration Service is a Paramilitary agency, they were instructed to put on white sporting attires for fitness training and easy identification.

The Ministry of Interior and the Immigration Ministry delegated the exercise to a consultancy firm citing transparency and accountability as reasons for this step.

On March 16, 2014, the Minister for Interior Comrade Abba Moro explained in an interview that the applicant’s impatience and failure to follow instructions were the cause of the tragedy. 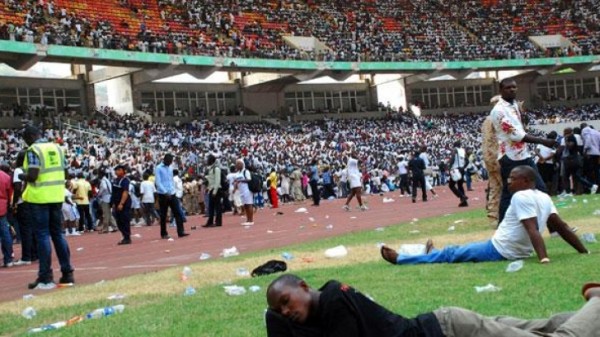 The Coalition Against Corrupt Leaders (CACOL) called for Moro’s prosecution.

Moro appeared before a Senate Committee on interior for two days of public hearings.

On March 27, he accepted responsibility for the events and expressed his grief.

He said he was saddened that his effort to put an end to nepotism and favoritism in the recruitment process had turned out like this.

The President also ordered immediate return of all the funds collected from the applicants. He went further to say that there would be a new recruitment exercise and the previous one would be cancelled.