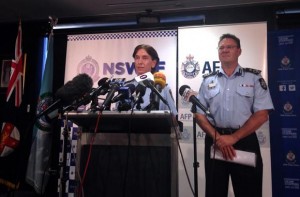 Two men behind what Australian police referred to as a foiled attack linked to Islamic State (ISIS) said in a seized video to “stabbing the kidneys and striking the necks” of their intended victims, Prime Minister Tony Abbott told reporters on Thursday. Reuters report:

Australian counter-terrorism police on Wednesday said they had thwarted an imminent attack after arresting two men in Sydney and seizing knives, a video and a flag associated with the militant group.

Police said the men, aged 24 and 25, were arrested after a raid on a home in a western Sydney suburb on Tuesday and had been charged with planning a terrorist act. Abbott, who said he was shown the video by Australian Federal Police, gave the most detailed account of the video’s contents to date, outlining what appeared to be a plot to stab or behead Australian citizens.

“… Kneeling before the death cult flag with a knife in his hand and a machete before him one of those arrested said this: ‘I swear to almighty Allah, we will carry out the first implementation for the soldiers of the caliphate in Australia‘,” Abbott told parliament. “He went on to say … ‘I swear to almighty Allah, blond people, there is no room for blame between you and us. We only are … stabbing the kidneys and striking the necks’.”