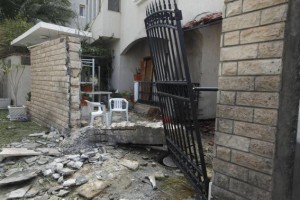 Militants who claimed loyalty to Islamic State have said they were behind Sunday’s twin bomb attacks on the residence of the Iranian ambassador in the Libyan capital and a rocket strike on the eastern Labraq airport, a group statement. Reuters report:

The attack on the ambassador’s residence came two days after the group claimed responsibility for a double suicide bombing that killed more than 40 people in the eastern town of Qubbah, one of the worst attacks on civilians since a 2011 uprising toppled Muammar Gaddafi.

Western powers are concerned that Libya is emerging as a thriving battleground for militants loyal to Islamic State, which controls large areas of Iraq and Syria. Islamist fighters have exploited instability as two rival governments fight for control of territory.

The group has stepped up attacks since Egypt launched air strikes on suspected militant targets in the eastern Libyan city of Derna on Monday, a day after Islamists released a video showing the execution of a group of Egyptian Coptic Christians.

On Sunday, two bombs exploded at the gate of the Iranian ambassador’s residence in central Tripoli. Iran’s official IRNA news agency confirmed the blasts and said there had been no casualties, adding Iran had already suspended operations there.