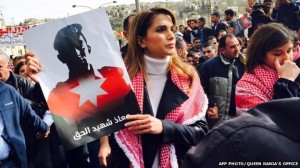 Thousands have rallied in the capital of Jordan, Amman, in support of their government’s military response to the killing of a Jordanian fighter pilot by Islamic State (IS) militants. BBC was there:

Among those marching was Jordan’s first lady, Queen Rania, who told the BBC the country was “united in our horror”. Jordan says its warplanes carried out dozens of air strikes on IS targets on Thursday in response to the killing. The country’s foreign minister said it was “upping the ante” against IS.

Until now, Arab states have only been involved in a fraction of the US-led air campaign against the militants. The focus of Jordan’s air strikes is reported to be Raqqa, the IS stronghold in Syria. Local activists and IS sympathisers reported fresh strikes in the city on Friday, but these have not been confirmed by officials.

On Friday morning, crowds gathered outside the capital’s al-Husseini mosque after weekly prayers, waving Jordanian flags and pictures of the murdered pilot, Moaz al-Kasasbeh. Some held placards that read: “Yes to punishment. Yes to the eradication of terrorism”, the AFP news agency reported.