Islamic State Militants Attack Iraqi Town Near US Base 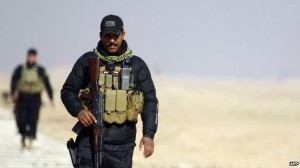 Islamic State (ISi) militants have launched deadly attack on a town in Iraq’s Anbar province, close to an airbase that is home to some 300 US marines. BBC reporst:

The militants attacked the town of al-Baghdadi, 5km (three miles) from the Ain al-Asad base, where the US forces are training Iraqi troops.

Heavy fighting was reported around the town, west of Anbar’s capital, Ramadi. The US is spearheading an air campaign against the militants, who seized large parts of Iraq and Syria last year. The US military says its aircraft carried out several strikes on IS positions in Iraq on Thursday, mostly concentrated around the Iraqi towns of Mosul and Kirkuk.

IS militants advanced upon al-Baghdadi early on Thursday, according to Reuters news agency, sparking fierce clashes with Iraqi government forces.

A Pentagon spokeswoman, quoted by Reuters, said there had not been any direct attack on the nearby air base. It is unclear if the militants are in control of al-Baghdadi. The London-based Al-Sharqiyah News channel reports that IS militants were repelled in the area by Iraqi security and tribal forces, backed by US jets.